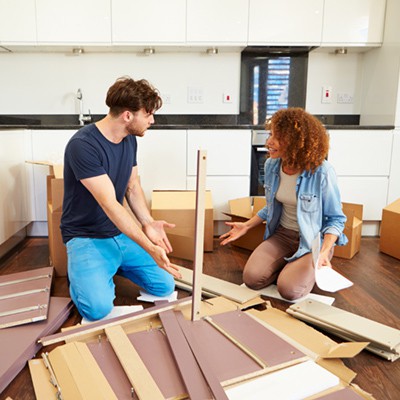 Anybody who was ever tried assembling a flatpack kit with their other half will know the exact pain points we are about to talk about.

If you have ever argued, either over or with a piece of flatpack furniture, you will probably have a few more words for the translation of some flatpack products –frustrating, annoying, torture and a few which can’t be printed in a family friendly article!

Just why is assembling a flatpack kit sometimes so difficult—they’re normally advertised as “easy to assemble.” Let’s take a look at some of the common mistakes made and five pieces of flat pack furniture ranked by emotional torture. 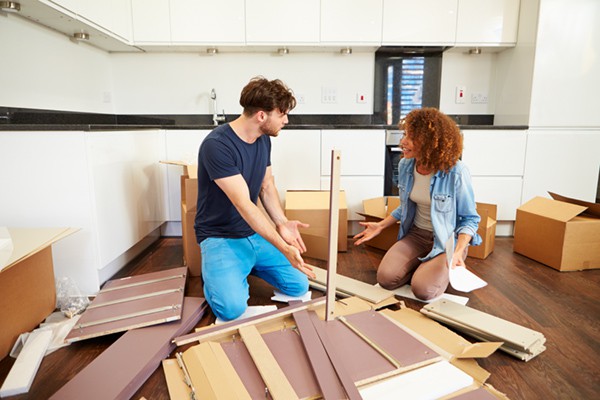 Why Are Some Flat-Packs So Difficult to Build?

Flatpacks come with instructions and all the parts and tools needed to be included in the box. Yet a recent survey in the UK found 44 percent of British people couldn’t assemble flatpack furniture despite the simple designs.

Unfortunately, or fortunately, depending on how you look at it, there are no similar figures of failure available for Australia. However, the plethora of flatpack assembly services springing up around the country suggests it may be a similar figure or even higher.

Let’s take a more detailed look at what’s going wrong before ranking flat pack furniture assembly from a walk in the park to pure frustration and near impossible.

Building a flatpack from any furniture store can often be an emotional roller coaster. Although Harvard Business School has identified the “IKEA effect” of building something yourself as leading to greater appreciation, getting there can be a headache.

The instructions found with most products may not be written in a foreign language, but they may as well be. In a recent interview, IKEA’s deputy packaging manager admitted the instruction manuals could be challenging but added they could be worse.

Designed to be used in any country or culture, IKEA’s instruction manuals (and many other global companies too) are deceptively simple. If a simple stick-like cartoon character can build a chest of drawers, then surely we can too.

SOLUTION: Collect all the parts that come in the flat pack first and layout on the ground or a table as you begin to read the instructions. Sometimes intuition will enable you to see a clearer picture of how they all fit together. However, do read the instructions and make sure you 100 percent understand them—if not, give Flatpack Assembly Services a call on 1300 352 872 to build your flatpack products for you. 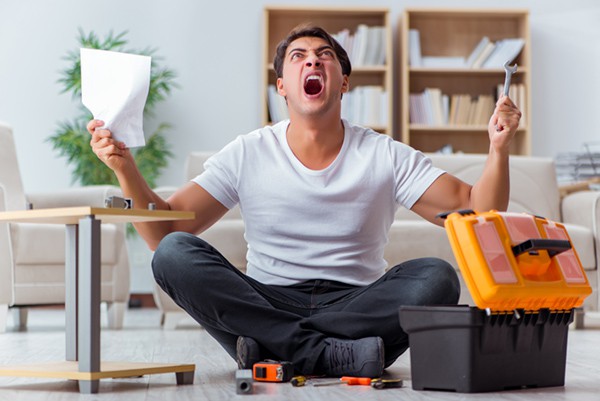 No company is perfect and anyone can make mistakes, sometimes your flat pack may arrive with a piece missing or too few bolts and fasteners. Laying out all the parts as described in the instructions manual checklist can allow you to confirm you have everything at the beginning.

If anything is missing, especially a large MDF piece, you will need to contact the retailer before starting assembly. If it is a few nuts and bolts, as long as you know the size you should be able to find them in your local hardware store. 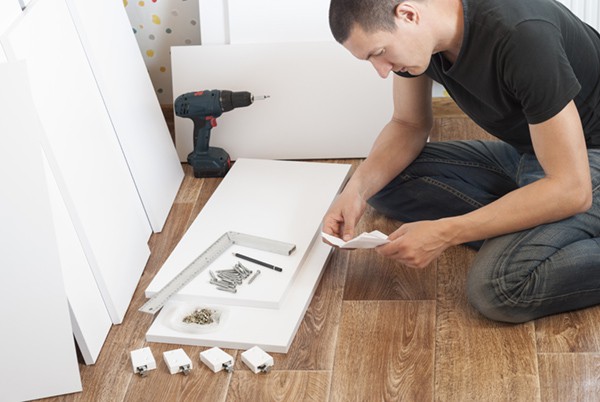 Where possible use your own tools. Freedom and other manufacturers will normally provide a hex key which you use to attach components together. Anybody who has ever used these will know how fiddly they can be. An affordable power screwdriver with hex attachment and a solid hammer won’t cost too much but can help with assembly. 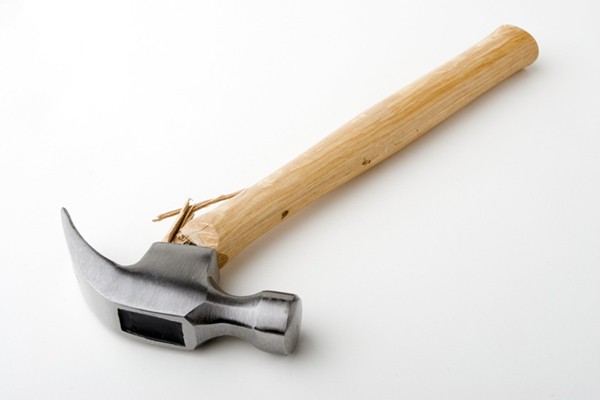 From wardrobes to bed frames, all flatpack kits will vary in the level of difficulty.

But which projects are easy and which are more complex? Where should you start when looking at beginning your flat pack adventure?

Start with the Easy Build—Tables

If you are looking for something not too challenging, tables can be very simple to put together. No matter what the design, normally a table is simply a flat surface you need to attach legs to before flipping over for use.

The only time a table may get complicated is when it has either a folding or sliding design. Just make sure you attach the correct parts in the right order and all hinges or sliding mechanisms are securely fastened. 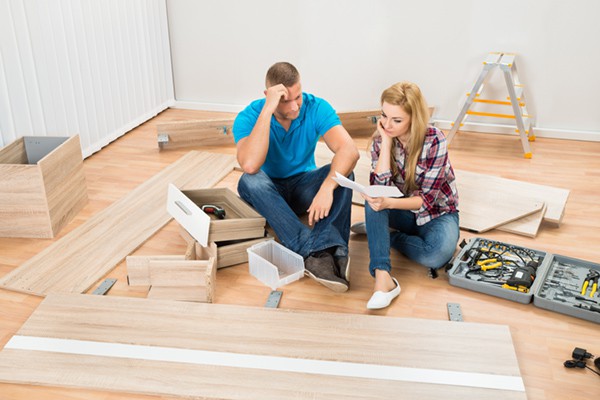 Most of us have fitted a shelf at some time or another, but we are talking about flat pack shelving units. Assembly isn’t too hard for the actual unit, it’s the standing underneath it while attaching it to the wall which can be daunting and that’s why Flatpack Assembly Services makes the job easy. We can secure and fasten your flatpack products to your walls in your home or office.

Time for Something More Complex—Wardrobes

I have seen many a grown man on the point of a nervous breakdown while assembling a flat pack wardrobe. They can be big, heavy and full of more complex things like drawers (see below). All the fiddly bits will need assembling in the bedroom too in order to avoid trying to lug it through the doorway or up the stairs.

Getting Close to Torture—Chests of Drawers or Dressers

When you attempt to build what should be a simple chest of drawers, you are at the mercy of ball-bearings and other sliding mechanisms which can be complex. The instructions can often seem like they were part of a design finals examination.

There’s nothing worse than building the outer cabinet to find your drawers don’t fit in the space, or don’t slide in and out too easily. We say nothing worse, but then comes the dreaded shelving units or storage units we talk about next.

The Divorce Maker—Shelving and Storage Units

Believe it or not, IKEA sells a piece of furniture which is so difficult to put together it has been nicknamed “the divorce maker”. The complicated storage system known as the Liatorp needs two people to assemble it and features a variety of shelves and panels to be assembled before being attached to a wall.

The Liatorp or similar units will take over your life, and what you save will probably be spent on therapy in future years. CivicScience performed a study where they found 17 percent of couples reported having arguments every time they worked together to assemble furniture—think hard, is it really worth it when you can hire an assembly service?

One of the biggest myths in modern life is the ease of construction of flatpack furniture. Forget about the instructions being easy to follow, they sometimes may as well be in Swedish or even hieroglyphics. Invest in some quality tools and set aside time to study and decipher those instructions for a less stressful assembly. Or as we like to say, save your marriage and call us today on 1300 352 872 for a hassle-free assembly service by your local professionals; Flatpack Assembly Services. 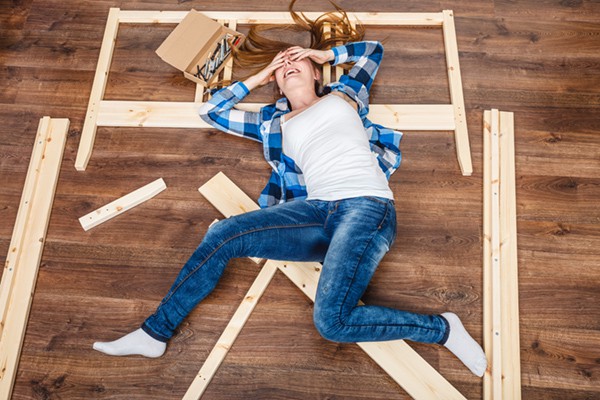 10 Creative Ways to Declutter Your Home

How to Hang Paintings and Picture Frames

Easy Tips To Decorate Your Rental Without Breaking The Rules

This website uses cookies so that we can provide you with the best user experience possible. Cookie information is stored in your browser and performs functions such as recognising you when you return to our website and helping our team to understand which sections of the website you find most interesting and useful.

Strictly Necessary Cookie should be enabled at all times so that we can save your preferences for cookie settings.

If you disable this cookie, we will not be able to save your preferences. This means that every time you visit this website you will need to enable or disable cookies again.